So what do Groucho Marx, a difficult drumming score and CRAZY eye-lashes have in common? Well, somehow or another their paths crossed in a small, two bedroomed house on the east coast of Ireland in 2011, when I set out to create something original! 🤔

I released ‘Moody Blues‘ in February 2011 and I was super proud of it. It did very well for me and received lots of praise and radio play, becoming a very popular choice on morning radio for its’ energy and message. However, less than 3 years later, I actually didn’t want to perform it anymore. I was a little embarrassed by it. The cynic that had begun developing in me was not, excuse the pun ‘in the mood’ for it anymore. It was a little too cheesy for my liking and it hadn’t opened any ‘serious’ doors for me. Embarrassed as I am to say it, I didn’t care for it anymore and I left it out of many if not most performances. 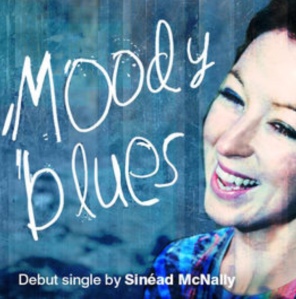 Fast forward 7 years and naturally life has changed me. It changes everyone year by year, experience after experience. My focus on ‘serious’ doors opening for me and being levitated into music industry fame pissed off about 2 years ago thank God, when real life came along and bit me in the butt a few times. Life softened me, despite facing some of my hardest moments and eventually I remembered to look at the whole, sweet, glorious picture.

I had become a musician who forgot the importance of being a creator. I had become a musician who depended on likes and shares and being ‘cool’. As much as I tried not to be musically driven by what people liked and what 2FM or Today FM were playing, I tried to be part of that gang. I burned out trying to fit in. Last night funnily enough, I had a dream about meeting a group of girls who I went to secondary school with. And guess what, they were the same bunch of assholes in the dream as they were in secondary school. Only, this time I was SO relieved not to be part of their gang.

Somehow or another, Groucho Marx, a crazy set of eyelashes and a nifty little drumming score were put together because I had ideas. Musical ones, lyrical ones, visual ones. And with a determination to see that vision through, ‘Moody Blues‘ came to life. Of course someone has already sung some of the lyrics and there are lots of chord progressions and melodies that have been played a million times before but the way in which those elements are presented and arranged because of the vision behind it are what make it original. Anyone can reproduce something that’s already done by changing it up a bit but originality lies in the commitment to a new way of presenting and arranging the musical content.

<I’m very proud of the song despite there being things about it that aren’t all that ‘cool’ anymore or ever maybe 😮 Because art is really just a moment in time, original because of the creator not because of the tools. Credit to Martin Quinn in Jam Studios for his incredible ability to produce and understand my mad ideas in studio and the very generous team behind the video production who survived on tea and crisp sandwiches. Finally to the beautiful venue that is Darver Castle in Co.Louth for letting us use their home and venue for our fun and games.